Animal Has a Unique Set of Eyes

I have four books, named for the first novel in the series, “Rising Tide.” In the third book, “Deadly Reign,” I introduce a four-footed character with fur named, Seeka. This animal has a unique set of eyes, can speak, possesses senses that allow him to track others, and in some cases move through different timelines or dimensional travel. Beneficial powers to own as you travel through questionable areas, wouldn’t you say?

Introducing Seeka is a good segue to modern day pets, and the like. Not long ago, I was what you might call an “animal lover.” Now, I’m more of an animal liker, and that’s “O.P’s” or other people’s animals. I do enjoy petting a friendly dog or rubbing a cat’s head, and recall owning a member of, ‘man’s best friend’ into early adulthood but now have no aspirations for anything that requires such extensive care.

When I was a preteen, I owned pets that were a bit more on the exotic scale, i.e. Boa constrictor, Iguanas, an alligator, although I believe it was actually a Caiman, and a ferret, named Floyd. Floyd was an adorable creature. Fun to watch, fun to play with, owning such a  sweet disposition rarely seen.

Animals are grand additions to this beautiful world where we live;  however, and I hope this offends no one, my love for animals leans more to the type served on a plate.

Have a great, wonderful, and fantastic week ahead, and remember God loves you dearly!

To Write or Not to Write. Whether Tis Nobler to Suffer the Slings and Arrows of Outrageous . . . . oops! Wrong Soliloquy

I thought I’d take a moment to relay the circumstances which led me to become a writer. I was diagnosed with multiple sclerosis November 2006. Two months later, January 2007, the position I held as a trade show construction supervisor and warehouse manager was abolished after sixteen years. During our winter fishing trip to Cape Hatteras, North Carolina, my son suggested I give writing a shot. I began to pen my old standard, ‘short stories,’ while still employed, uncertain if I had a novel within. A story line soon emerged pulling me into the world of “Rising Tide.” With my first novel reaching completion, I decided to delve into the world of self-employment, opening a single employee (me) drafting business (CAD).

It’s now the spring of 2008. I find a publisher to take on my novel which becomes a reality in the spring of 2009.  My drafting business is going gangbusters. I’m having to put in 14 hours a day 6 days a week.

July 2008 rolls around, and guess what . . .the economy tanks, my business nearly beating it down the toilet, and I’m up to my armpits in edits and re-writes, which ain’t necessarily a bad thing. In fact, it proves that one out of two (here’s that word again) ain’t bad.

Fast forward to today. I recently released my fourth novel, “Deadly Reign.” I have two more books in the works. The next in the “Rising Tide” series and a stand-alone novel that revives a character from a previous book used in a cameo role and now as the protagonist.  I’ve just scratched the surface in the world of authorism. So  I certainly don’t feel qualified to offer any spectacular, over the top, fail proof words of wisdom.  If I were to offer any advice, I’d simply say:  Never give up, expect rejection, don’t take yourself too seriously, and most importantly, have fun. God bless!

“I believe my purpose is known to all present,” Cahotic replied.

“Mount up,” Caleb said, “and do not remove your eyes from them.”

Pete complied and climbed onto his horse.

“I need no other than these,” Orac stated, holding up his fists.

“Now, Caleb,” Cahotic chastised, “is that a proper welcome for old friends?”

Orac backed up to meet Caleb. “Yes?” he said.

Caleb leaned over and whispered into Orac’s ear.

Orac smiled and then nodded, returning to his previous spot.

“Make ready,” Cahotic said, “and separate the necessary parts. We must renew our supply of gel.”

The riders pulled their swords and moved forward. The line was staggered in a stepped orientation, allowing each rider to shield the one behind. As the first aberration moved onto the snow-covered ice, an inaudible cracking ensued. Caleb sensed the ice give under the great weight, as the second rider followed his predecessor.

Orac bent over, slamming his mammoth fists into the ice. Cracks developed in the crust, spreading from the epicenter in spider-like fashion. Orac continued his barrage, crawling further onto the ice as he decimated the concrete water. He felt two points of pressure along his back. A small figure wrapped in fur vaulted from his flank and onto the rear of the first rider’s beast. He wielded a spear with a fine bronze tip attached to a smooth brown shaft. The newcomer plunged the spear with no ill effects, hitting pieces of armor and plated green scales. The first rider and his steed dipped to the left and then to the right. An ear-splitting crack echoed through the forest, and the rider sank. As the creatures continued their descent, the small figure jumped from the rider. With uncanny agility, the strange fur-covered form bounced along small chunks of ice, floating in the stream until he reached the bank. Astonishment enveloped The Three, uttering not a sound as they watched this acrobat.

The second rider attempted to turn and make it back to solid ground, reaching the bank as the ice collapsed beneath him. The animal sank to its midsection before it could gain a hold with its forelimbs, the aberration it bore slid off its back. Steam drifted upward from the pair as the water permeated their bodies.

Orac ceased his assault and circled around to return to his comrades.

Caleb turned to Ben. “Gather wood for a fire,” he said.

Ben, Pete and Eve dropped from their horses as the ice gave way, plunging Orac into the frozen slush.

The first rider was now chest deep in the center of the stream. Huge bubbles from underneath exploded as the beast that bore him disintegrated. The rider himself silently melted into the stream, his head exploding in small puffs as if boiling in a cauldron.

The second rider’s mount, using its front claws, inched itself onto the bank. Its rider plunged his sword deep into the beast, allowing it to pull him along. The pair breached the water’s surface, both formless from the midsection down, their remaining torsos dissolving in a mass of tiny gurgling eruptions. 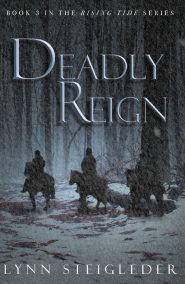