Christmas, One Holiday Out of Control! 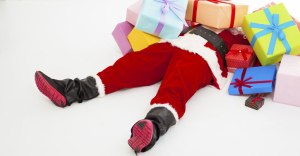 Boy, its hit and its hit hard. What am I talking about?  The Christmas shopping season of course.

Black Friday, which normally starts the day after Thanksgiving, this year began a week early and as far as I know, is still going on. The saving of a few bucks on any given item brings forth the phenomenon of docile adults turning into savage children. I feel a certain amount of shame when I see the fist fights on television when said childish adults begin to duke it out over the latest widescreen tv.

It seems we’re running a holiday contest on how much we can spend. It started with Black Friday, moved to Cyber Monday and now, we have of all things, “Orange Thursday.” The commercialism of Christmas began years ago, but I don’t believe anyone could have predicted the monster we have created.

How could we take a holiday that was meant to commemorate the birth of a savior, our Lord Jesus Christ, and turn it into a money grubbing free for all? And, don’t think for a moment I’m leaving myself out of the mix. I’m just as guilty of spending too much and leaving the importance of Christmas behind.

We live and learn . . .  hopefully we truly learn.