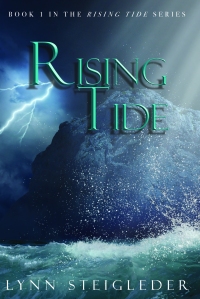 I have a science fiction  novel unrelated to the “Rising Tide” series  being released  during  the first part of 2016, “Terminal Core.” More to follow.

I am re-posting information on the “Rising Tide” series on  sale until the end of December.

Another blast ripped through the Orion cutting all power and knocking him to the floor. Ben lifted himself off the deck and found it was impossible to stand. He crawled to the COM panel. “Marty! All systems down! All systems down!” he repeated. A category six hurricane above and the habitat below, he just left destroyed by the blast, Ben finds himself alone in a decompression chamber.  In Rising Tide, Lynn Steigleder depicts a world slowly being covered by the seas.

Ben’s best friend is killed in an underwater implosion on a dying world. Living to die again, the two men reunite and battle for an ancient artifact, a relic which will ensure this planet’s survival. Ben crosses a threshold. The world he leaves—doomed; the world he enters—reborn. His wife, Eve, and their bumbling charge, Eleazor, follow Ben through the doorway and blindly into the void.  They continue their adventure battling a menagerie of creatures  bent on destroying the group and their faith.

Both novels in the ebook  format will be on sale for $1.99 on Amazon and  http://christophermatthewspub.com from now until the end of December.

Hope you had a wonderful Thanksgiving  and GOD Bless.