Have You Read the Book about the Grasshopper and the Caterpillar Due to be an Instant Classic? I Hope.

As much as I enjoy writing fantasy and science fiction, I believe some of the most gratifying moments 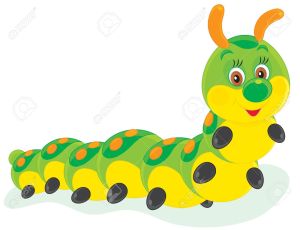 have come from penning a children’s book for my little grandson. His name is Elijah, but to me, he’ll always be l’il Ed.

That name came about in an unusual way. A good friend of mine whom I worked with for years answered a telephone call that was meant for me. Not having the best command of the English language, he called out to me. The ensuing garbled message ended with my name sounding like “Ed.”

Needless to say, the name stuck and many of my coworkers began calling me Ed. I in turn saddled my little buddy with the same name, making him my namesake. Perfectly legal in my eyes since my eyes were the only ones looking at the situation through my eyes.

Now, l’il Ed is every bit of three years old. At this young age he is a certified engineer on steam, diesel and electric locomotives and has received an honorary Ph.D. of numbers. His post graduate work revolves around exotic, as well as classic, automobiles.

The book is nearing completion. Although the story is in place, illustrations, cover art, and back matter are still in the making.

In order to give you a short synopsis, the book contains two characters. Papa (that would be me) as a grand daddy long-legs and l’il Ed (that would be l’il Ed) as a tiny caterpillar who rides atop Papa’s back.

They share adventures and view first-hand the miracle of God’s creation.

One of my best buds, Suzie, is taking care of the illustrations. I look forward to the day I can hand l’il Ed his very own book… Oh, I forgot to mention, he is also a master of the written word.

*****
On a totally unrelated side note, let me know if you think this phrase could catch on? I was using Dragon software and my computer decided to type anything but what was dictated: “It didn’t take me long to cursor across the age.”

Not bad for a machine run amok… Huh?

Until next week, have a wonderful seven days.

Oh, the Horror of it All

I’ve had several people, one in particular (who happens to be a very close friend) suggest that I write a children’s book. The first words out of my wife’s mouth were:

“Are you sure you want him to write this book?”

You see, I normally stick to action, adventure and fantasy. Now when I say fantasy, I’m not referring to dragons, wizards, damsels-in-distress and the like. It’s more on the order of unimaginable creatures, ripping body parts from other unimaginable creatures… Oh, and human beings running around complicating the story.

I also write Christian fiction, where demons rip the body parts from other demons (but in a nice way) and once again human beings throwing themselves into the mix. I guess you could label my work as one big dysfunctional family with an affinity for body parts.

I mentioned the word family a moment ago and ask that you humor me as I change the subject for one moment.

Before family could move from my brain, down my neck, split to the right and left, traveling through each arm, into my hands and fingertips, which tapped the keys, ultimately displaying the word on the monitor…deep breath… It was being pushed by a phrase, down my neural pathways, just waiting to make its appearance.

Friend of the family!

A bit lackluster you say? Possibly, but what exactly is a friend of the family?

It could be that guy, you know, the one that shows up at all the larger family functions. He’s Gertrude’s forth cousin, twice removed from the milkman’s, half-brother’s, step-grandfather’s, childhood friend.

Yeah, everybody knows him. He’s a friend of the family.

And then there’s Cora. She was someone’s, daughter’s best friend… I think it was Daisy, Brenda and Earl’s child.

Cora and Daisy were inseparable, from kindergarten through high school. After graduation, Cora married, had two kids and moved to Los Angeles. No one knows what her husband does for a living, but he makes megabucks doing it.

As for Daisy, the only place she moves from is the couch to begin her shift at the Piggly Wiggly, but she still shows up at Cora’s family get-togethers although she has moved into the ranks of friend of the family.
Remember Percy? He used to be a friend of the family, only he became a little too friendly and it’ll be at least 15 years, with good behavior, before he can carry the title again.

Fortunately, there are a lot more Buddies than Daisies and Percys in most families.

Thank you for allowing me to indulge upon a whimsical thought that just popped into my brain.

Now we shall continue what you all have been waiting for… My first children’s book!

Think… Think… Think… I’ve got it. A book loaded with animals (Yeah, kids love animals), and they’ll all be cute little zombie animals. That way they can rip off body parts and it won’t matter.

Baby’s first horror book… And I even have a title… Check this out… “Fred, Fred, and his Band of the Dead.”

book. Okay, you got me, this is the first time I’ve ever mentioned it.

I would have to decide on a cute, little, desirable character. Bunny rabbits, chicks, turtles, baby birds and even little lost fish have been done to death.…… I know, a big, fat, juicy, baby, grub worm. I could name him Bippy. And the book would be about Bippy’s adventures moving inches each day through the dirt and rotten tree stumps, doing what big, fat, juicy, baby, grub worms do. Then, one day a man making a survivalist television show eats Bippy raw. Poor Bippy.

Bogart, the legless mosquito? Unable to fly since birth due to a lack of ballast offered by the missing legs, we find Bogart in the backyard of your average, middle-class, suburbanite family. We follow Bogart on his perilous trek through a finely manicured lawn, dodging avian attacks, and avoiding such dangers as snakes, turtles, frogs and cannibalistic insects as he makes his way to the house.

Bogart continues his death-defying journey, knowing that his first meal awaits in the life-giving fluid that courses through any one of the humans that abide in yonder abode. Finally after squirming, rolling and wriggling his way the necessary three feet to the back deck, he nestles himself into a crack on top of the handrail awaiting his bipedal victim.

A likely target steps out of the back door and places a hand on the very same rail that the emaciated Bogart has taken up residence, poised to strike. Before the hand can reach the gaunt mosquito, Bogart is devoured by a wingless bat that throws itself from the roof and snatches the hapless Bogart from his hiding place.

The bat we will call Wrigley (because that’s his name) promptly rolled off the rail and onto the ground. He begins to squirm across the finely manicured lawn, still masticating poor little Bogart, until Wrigley himself is slowly gummed to death by a toothless cat called Knuckles. Knuckles is later found dead, having choked trying to swallow a wingless bat with puffed out cheeks full of partially digested mosquito parts.

Sadly, these mosquito parts contained no legs, but now Bogart was finally able to soar high with his fellow departed mosquitoes.

Aye, a fitting end for all concerned. I think I’ll call it, “Bugs, Bats, and Cats: the Other White Meat.”