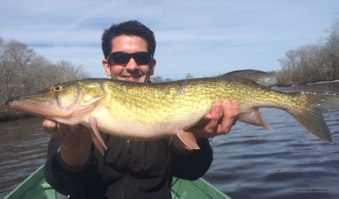 One thing I love to do, from my days as a child and well into my adulthood, in fact, to this very point in time, is fish.

In my younger days, we lived in a rural area within a mile of the Chickahominy River. The walk was nothing compared to the thrill of reeling in a Pike. At least that’s what we called this wolf of the waterways, which is related to a Pike, though Chain Pickerel is its proper name. According to Discoverboating.com, the Chain Pickerel can reach lengths of three feet and weigh seven pounds, the world record being nine pounds and six ounces.

We would find smaller tributaries off the main river and walk the center of these canals, casting from side to side to catch fish.

One instance I hooked a Pickerel then placed it on a stringer that was tied to the back of my belt and continued to fish. After a short while, I began to receive taps on my lower back. Turning around, I jumped out of my clothes and skin, figuratively speaking as the fish’s head looked like a huge snake. Needless to say, this did not dissuade my pursuit of the fresh water Barracuda in this manner.

Ya know, this would make a great beast in a science fiction novel . . . just sayin’.

This is just a short trip down my memory lane, I wanted to share with you.

Have a wonderful week and:

May the Lord bless you and keep you;

the Lord make his face shine on you and be gracious to you;

the Lord turn his face toward you and give you peace.

I consider writing a 9-5 job – five days a week complete with occasional weekends. The difference being that I have too much fun creating worlds, characters, and creepy crawlies to fill those worlds to think of it as work.

Mark Twain said, “Find a job you enjoy doing, and you will never have to work a day in your life.”

Thankfully, I’m living that dream. It wasn’t always this way. I’ve plugged through the daily grind of a job that truly was a job.

This brings to mind a conundrum that I have trouble wrapping my brain around. I hear some say, “I’m trying to find myself.” In and of itself, a quote such as this in many aspects tells me this person would rather do nothing and hide behind Twain’s quote.

Perhaps there is a legitimate way to bring these words to life. You could always stand in front of a mirror and utter a statement such as, “There me are!”

On second thought, maybe a better idea would be to ‘reflect’ on the situation. You have to admit, reflecting on any unknown can bring the problem to light; or not. If you stand in front of the mirror we mentioned earlier, that would solidify your exact location in time and space. Still an unknown, would this be you standing in front of the looking glass, or you within the confines of the looking glass?

Before I delve into the concept of spatial and time relationships, I’ll defer and leave that little slice of nothing for someone else.

Make this week better than the great week you had last week, and don’t worry about finding yourself. If you ever begin to feel lost, stick a finger in each ear, then look down at your feet. This way you’ll know where you are from head to toe, and to reinforce this notion, just remember no matter where you go there you are.

Hang in there and relish God’s blessings, for they’re everywhere!

I Graduated High School Early to Commence my Vocation, Driving Nails as a House Framer . . . Some Move, Huh?

I spent a portion of my weekends during my teenage years, all of my twenties, and part of my thirties in the field of construction. I began my career at 14 learning how to side houses. Two years later, I graduated high school early to commence my vocation, driving nails as a house framer . . . some move, huh?

I stepped into the field of commercial construction and ran my first job at 23, as a superintendent.  Construction was good to me, but then I found something better. I began to work for a pharmaceutical company in their trade show division.

I’ve gone around my elbow to get to my thumb, the long way you might say, to talk a bit about fasteners.

I couldn’t begin to name the different substances I’ve used, some so hard it would dull several diamond tipped bits before the hole would reach the other side.

Fasteners come in every shape and size to connect just about anything to anything else.

The nuts and bolts include any material having a solid form such as: wood, metal, stone, plastic, glass, fabric, earth, and many more I either can’t remember or was ever aware.

Take the a fore mentioned list, mix it with a similar list and you can attach everything from your skivvies to the bumper of your grandma’s “78” Grand Marquis, from a weather worn tennis racket, to the underside of your downstairs half-bath.

And, there you have it. Positively everything you need to know about fastening one thing to another. Remember folks, you heard it here first. Have one great week! And, may God bless! 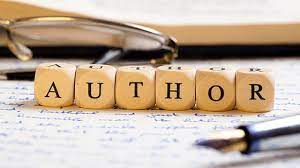 I didn’t realize what I was in for when I became an author not so many years ago. I write Science-Fiction/Fantasy, and Action Adventure.

It still amazes me that completing a novel, then moving to the next, time and time again, never loses its sense of exhilaration.

Creating new worlds, and the creatures within the genre I write, leads to many interesting characters, human and otherwise.

Along with the bipeds, come a multitude of caustic critters just right for killing, all wrapped up in unique surroundings.

Writing can invoke passionate feelings within readers, even though the characters only exist as a concept in the recesses of someone’s mind.

Funny, this item, known as a book, that we delve into so deeply, causes readers to lose sleep in order to absorb one more chapter.

If you begin to nod at work maybe you should not have continued to read extra chapters. I don’t believe any of the characters in your present night-time read will come to your aid as you fight off sleep during the day.

I appreciate you taking time to read this post. Have a great week, and God bless.

As an Author, I Spoil Myself by Taking an Occasional Stab at Word Creation

As an author, I spoil myself by taking an occasional stab at word creation when deemed necessary. Since it’s my work, I don’t mind indulging into what normally would be considered taboo.

In the real world, I believe there are numerous words that could benefit from a redo. For instance, an un-popped piece of corn is known as a “kernel;” yet, in the military, the rank carrying the same name is “colonel.”

While we’re on the subject of the military, why is a dining hall referred to as a “mess?”

Did you know the shortest sentence in the English language is “Go!”

Shouldn’t Pedialyte® for adults be . . . I don’t know, more like, Adultialyte?

Now, here’s one that’ll frost your corn flakes: If Latin is a dead language, having it be the root of the lion’s share of English, Spanish, French, Italian, German, and the Mediterranean Sea area, tells me it’s alive and well. If nothing else I hope this week’s post will give you something to ponder.

Have a spectacular week and may God shower you with blessings.