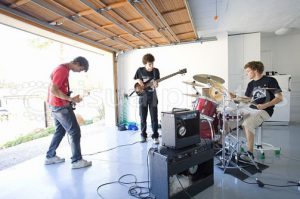 Before I began writing a string of best sellers . . . all right, one best seller . . . okay, I haven’t broken through to the best seller list yet; however, and I want you to take this to heart, I am only a few thousand books away, I was going to be a rock star.

Back in the 70’s, when but a teenager, I had been playing my father’s guitar (a 58 diamond anniversary Gretsch) when I decided to save my coins and purchased a black 76 Les Paul custom with three gold pickups. Allow me to tell you I was ready to set the world on fire.

Once we went through the process of selecting the band members, we began to hone our craft. To start off, we played cover tunes consisting of the most popular songs of the day.

We were officially ranked as a garage band. In those days, as I am sure is the same today, noise remains a problem. I cannot count the number of times the police were called on our tiny little foursome for releasing an overabundance of racket. I believe they call it, “disturbing the peace.”

One of our largest obstacles was equipment. For the most part, guitars, amplifiers, and drum sets were a cinch . . . well, a cinch compared to the difficult items.

The first on the list . . . and this was a biggie . . . a PA system. I played for years with a substandard singing apparatus. Of course, when I think back, our second-rate PA’s matched our inferior ability to play, so it all came out in the wash.

It’s a lot like writing. You endure much criticism before you finally hash out what you need to succeed.

The later years were much kinder and rewarding. We were booked every weekend, with occasional weekdays, and some out of town work. With full-time jobs, this was about all, and truthfully more, than we could handle. I gave it up several months before my baby boy was born.

Like many things, it was fun while it lasted, but I’m glad that it’s gone.