Word Usage . . . Sometimes I Think It Would Just be Better to Grunt 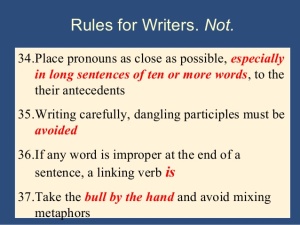 In the world of writing, there are many different phrases used to define grammatical errors, such as, an inappropriate verb tense, a misplaced modifier or forbid there ever be — a dangling participle.

Then, there are three words – analogy, simile, and metaphor – that tend to puzzle me. All are akin to one another, with two (simile and metaphor) being nearly identical.

It had to be the same maniacal being who ran amuck creating homonyms that was allowed to bring these three dastardly words into being.

With these and all else I have been griping about today, it gives me a way to fill up space on my blog while venting about things that really don’t bother me, but gives me fodder for my blog.

I think I’ve already said that.

All in a day’s work.

Being Close to Those You Love Can Take Many Forms. Allow Yourself the Freedom to Remain Open to them All 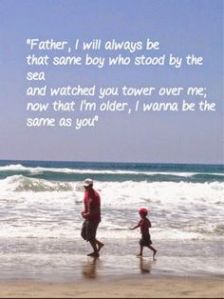 I know I’ve written about this subject before, but the beautiful colors outside this time of year lend it to countless more.

One of my favorite places is the beach. This time of year, my favorite beach would have to be Cape Hatteras, along the banks of North Carolina. As I also must have mentioned in a previous post, my son and I would take a trip this time of year to surf fish for drum, blue fish and the occasional striped bass.

What I have failed to say (and this accounts for all trips as we would make three a year) was the closeness that it brought us as father and son. We’ve had a wonderful relationship from the time I held him in the delivery room until now, but the trips we took (which began before his teenage years and lasted well into his college days) were special in many ways.

During our down time from the beach, we would watch movies, concerts (our favorite band, RUSH) and cook gourmet meals.

Over time he has accumulated a wife and a son who is a bit over one year. We’re still as close as we ever were, if not closer. I pray that my boy and his son have the same relationship that his father and he has. And the little one better watch out. I have already fallen in love with him and PaPa loves hugs and smooches. I can honestly say, family is where it’s at!!

Celluloid Heroes Dance Before My Eyes

In years past, a small percentage of books became movies. Currently it seems, each movie that travels across the silver screen begins with a hard front cover, a hardback cover and a plethora of paper and ink in between.

Being a writer, I would love nothing more than to see one of my novels I had pumped so much energy into flying across that screen. As an author, I would feel complete.

No time for wishful thinking. We’ll look forward to that at a later date.

At the moment, (and I don’t know why) an awkward thought has crossed my mind (and this happens more frequently than not), the mere mention of the silver screen has brought about my childhood and teenage years spent staring at the majestic drive-in movie screen.

As a child, my father cut a piece of plywood that would fit into the backseat of our Buick. He would cover that with quilts, blankets and pillows so my sister and I could lie down in the back and watch the movie until we fell asleep. In those days movies were double features that began with a cartoon . . . ahhh . . . the good ole days.

I remember there was a centrally located building that housed the camera equipment and a snack bar.

As a sixteen year old, the drive-in theater had already begun to phase themselves out. Fortunately (or so I thought), there was one still close to me. I found it to be a place where you could fog up the windows of your car. Of course, this was accomplished with a few smooches and nothing more.

All in all, this has been a nice little drive down memory lane. Hmmm, I wonder if there may be one of those elite forms of entertainment left. I guess I’ll have to jump on my favorite search engine and take a look and see . . . then again, maybe not.

Doctor, Lawyer, Indian Chief, Even Might Find a Little Time to be a Thief . . . Probably Not

Several years ago I began writing a humorous piece on a couple remodeling their home. They were not performing the work themselves, but moreover acting as the general contractor.

This is something that has become the norm, especially since all of the D.I.Y. programs have appeared across the stupid screen. Please don’t take this as an insult, for the one penning this blog absorbs entirely too much of the screen of stupidity himself.

I cut my teeth after school and on weekends, when I was fourteen learning how to remodel homes and then moved into new home construction, From foundations to roofing. I built everything from the simplest rancher to four thousand square foot homes, in the ritziest of neighborhoods.

I then moved on to commercial work,  finding it offered so much more. By the age of twenty three I began my first superintendent’s job, albeit small, to me I was raising the Empire State building.

Years passed and jobs in size grew, until I abandoned it all in my early thirties for a position in a trade show fabrication shop for a pharmaceutical company.

Here I learned how to build cabinets and some of the wildest displays you could imagine, not to mention traveling the length and breadth of the United States.

Due to health reasons I left this line of work after sixteen years and of all things, chose writing as my next attempt at a career.

So far things  are going well, at least they look good on paper, (no pun intended) but not as good as I would like as far as lining the wallet goes. I’ve published four novels, with a fifth on the way.

What I have learned from this lifelong experience is, never give up!

As far as being an author, I don’t believe I could have chosen a more enjoyable vocation, but if you don’t get your books in front of eyeballs that will read them, you may as well scribble on paper with a crayon. If you want to be a successful writer, then remember these three words…Marketing! Marketing! Marketing!