Too Much Time, Not Enough Time, Time After Time, Time And Time Again, C’mon Makeup Your Mind

I am working diligently on my latest manuscript. I write mainly in the science fiction and fantasy genres; however, this is the first time I have delved into the concept of time travel. Now, there’s a lot of things one can do bouncing from this time to that time, time after time. I suppose one could smack one’s own self upside the head if one had a notion to do so.

My manuscript, I must admit, has a tendency to drive me a bit crazy. If there were only a few characters  this would not be the case, but keeping even a moderate amount of imaginary actors in their correct timelines can be a daunting task. It’s extremely easy to add another layer of difficulty to the mix when you write as I do. Some authors outline their entire book chapter by chapter before they begin writing. Me, I fly by the seat of my pants. It gives me more freedom to take off on an undetermined tangent which brings my book to life. In this way, along with my help, the book writes itself. So the next time you look at your watch, wall clock or sun-dial, imagine yourself in a different time setting even if it’s just relaxing in front of the television later that night. Me, I just may end up on a peaceful island reeling in a plethora of exotic fish. We never have enough time so use it wisely. 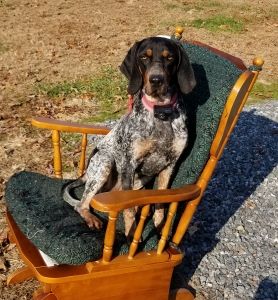 As a boy and a young man, I always owned a loyal canine. I guess through the years of losing four-legged friends and not wanting the responsibility of taking care of another living creature, I decided no more after my last pooch passed. I was still fond of the noble creature but found that fondness drifting to being fond of what I coined “OPD’s” or other people’s dogs. It’s kind of like the grandchildren of the canine world. You pet them for a while then back to their owners they go.

I’m the opposite of my personal assistant, and yes, I need an assistant because of this guy in a white lab coat who jabbed me in the back with a needle  I could’a spit an olive pit through, then shoved me into a tube two sizes too small that commenced to sounding like someone was pounding on a pipe with sledge hammers, cinder blocks and jack hammers. Then he had the nerve to tell me I had multiple sclerosis. This made my fingers hopping mad, so they went on strike… but I digress.

My assistant owns four dogs. Each one visits their veterinarian more than most children visit their pediatricians. They eat special food and have luxury accommodations for napping. These animals are considered special-needs, four-legged children. One has colitis and the other is a diabetic. She’s still typing, but giving me the “stink eye,” so nuff said.

I remember as a child our dogs would receive no more medical treatment than a rabies vaccination and live a long healthy life well into their teens.

Be it Old or be it New, Everything Starts With an Upside That Eventually Turns Woefully Obsolete 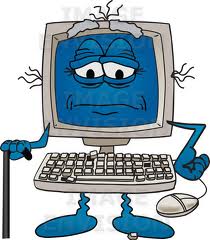 I’m looking at my HP processor, ergonomic keyboard and wireless mouse. This takes me back to the first computer I purchased. In fact, I still own that magical scientific appliance today. This PC was none other than a Packard Bell with just over 570 MB of storage capacity. This marvelous machine held a massive 8 MB of RAM expandable to an unbelievable 16 MB. The futuristic remote storage system (known as a floppy disk) allowed the user to store and transport 1.44 MB at will.

What more could you possibly want? You could give this PC a command and have time to pull a drink from the refrigerator and be back to your seat before the command was fulfilled. To keep the fact that I was working to be a writer away from prying eyes, I used this computer, being as it was stored in a remote part of the house. I didn’t have WORD on this computer, so I wrote in Note Pad. The real trick to operating this piece of retro gold, was trying to transfer media from a floppy disk to a CPU that used USB ports and flash drives for storage.

You know, all in all, I don’t guess it was so bad. If I think back to the days of H.G. Wells, I can’t imagine typing on an actual typewriter and doing edits and re-writes on such an archaic device. I’m sure I complained back in the day, when the Packard Bell was the computer to end all computers, simply because of the lack of processing speed, but then again, isn’t everything relative?

I posted a blog not too long ago about the return of spring. I wrote this aforementioned blog remembering the many springs I had experienced throughout my years on this planet. One of the mainstays in the previous article was the effect of pollen wiggling its way into the human condition.

Now that the green-dust-that-covers-all is back, I am able to record it live instead of write about it from memory. I hear fellow human-beings say, “Oh, look at the beautiful flowers. The dogwoods are beginning to bloom. I just love the apple blossoms.”

I’m glad you’re enjoying the beautiful floral show. I’d enjoy it along with you if my itchy eyes weren’t dumping juice by the quart. And, why stop there? My snot locker is so full that the mucus doesn’t know which way to go. Half of it runs out of my nose and the other half down my throat. This allows me to enjoy it later, coughing it up in the form of phlegm balls. Spring is a beautiful time of year, as are all of God’s seasons, but alas, the beauty is lost on me as my senses during the months of April, May and June are clogged, dull, runny or stuffed. Just wait til summer hits, with its 98° temperatures and 98% humidity . . .yeah, I know, whine, whine, whine, whine. Well, somebody’s got to do it; so it might just as well be me.