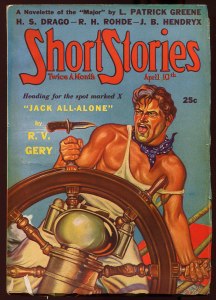 Recently, I’ve been stuck on the subject of rejections during the course of writing. I would be remiss if I were to leave out my entire life story while traveling down that wonderful road of rejection.

During my early days immersed in the glamorous spectacle that is writing, I determined my course from reading other glamorous publications that assisted early glamorous writers.

This publication instructed new writers to attempt having their work placed in magazines and other such articles. This would in essence emulate crawling before walking; showing agents or publishing houses that you were, in fact, a published author lending more credence when they perused your best-selling manuscript.

I began in earnest writing short stories in the science fiction and horror genres. I sent these stories to the larger science fiction magazines, confident I would find a home between the covers.

Alas, no one took the bait. I was forced to drop a notch and send my stories to a magazine a few rungs down the ladder. This continued for some time. I eventually ended up trying to publish my babies in on-line magazines that would boast circulations of dang near a hundred readers.

Well, to say the least, I was scraping the bottom of the literary world. I couldn’t really blame it on the barrel, so the only one I could lay it on would be me. Even though I had developed a rather thick hide, I dare not delve into the world of flash fiction or even one word fiction lest I never find my way out again.

I did the only thing a person who wishes to become a writer can do. I took to honing my writing skills and now have three published books to my credit.

If you get nothing more out of this blog post, let it be this: Author friends don’t let other author friends write stupid.

This has been brought to you by a grant from the Lynn Steigleder Foundation, preventing people from writing sub-standard manuscripts since this blog post began…I hope.