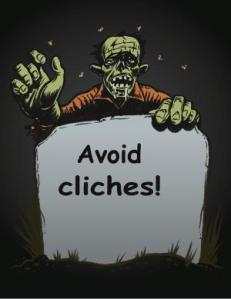 Case in point: clichés. You never seem to run out of one liner’s triggered toward engaging a thought process that would cause one to place a finger aside their face, gaze upward and utter, “hmm.”

As an example: “Absence makes the heart grow fonder.” Now this one can go either way. If you and your significant other are to be apart for a weekend or so, I’d say yes. If it becomes more of a constant…what is that I hear…the rustling of divorce papers? Nuff said.

Here’s one of my favorites: “There’s a first time for everything.” Back up a couple of paragraphs and you can picture me with my finger aside my face, my eyes pointed toward the heavens, uttering the same tired response, “hmm.”  I’ve never had a broken leg…does that mean there’s one in my future? I never considered lopping off body parts and changing my name to one of a different gender. Kind of an odd comment to make, being a man with a lion’s share of testosterone and the first name of Lynn. Notice the name is spelled on the feminine side, but no matter, that confirms the lack of validity for this cliché, cause I’m going home with everything I started out with on this planet.

I see a couple loose clichés looking for someone to bother. Please excuse me while I work up a beat down.

Terminal Core, my latest release is now available as a GIVEAWAY at Amazon. Follow this link https://giveaway.amazon.com/p/f784c34a4836a301 Good

I’ve never considered (until now) writing a self-help book. It came to me out of the blue. I was sitting at my computer entertaining the idea of writing a self-help book when it hit me, What do parents with graduating high school kids want most? They want more for their children then they had, i.e. a college education and a good career. They also want to obtain these ideals for their kids at the best price possible.

What do parents with children who share their desires dread hearing more than anything else? “I want to take a year off, travel around Europe and find myself before starting school.”

I guess that’s something I’ve never understood. I want…or better yet, need to find myself.

There are easy…nay, simple ways to accomplish this almost immediately without busting ma and pa’s savings.

If you don’t believe me, look in the mirror. Well, I’ll be, there you are. Now, if you step away from the mirror and become lost again, then, you need a lot more help than I can supply (not that I’m qualified to offer any assistance in the first place).

If you still feel the need to “find yourself,” then don’t blow loads of your mom and dad’s cash traveling through foreign countries. There’s no need to travel any further than the bathroom, and you’ll always know where you are.

So get lost, you bother me.

Terminal Core, my latest release is now available as a GIVEAWAY at Amazon. Follow this link https://giveaway.amazon.com/p/54637104eeedb61c  Good

I’ve Been Rejected so Many Times I Created a Novel From my Rejection Notices…and What Do you Know, Acceptance at Last.

I’m sure you’ve heard about authors being turned down numerous times before finally finding acceptance. For example: J.K. Rowlings was rejected a dozen or so times before someone found space for “Harry Potter.”

Stephenie Meyer was another author scorned until she found huge success with her ” Twilight Saga.”

Even Stephen King was rejected thirty times before his first novel “Carrie” found a home.

Keeping these in mind, do you ever wonder if the agents/publishers that rejected these stories are still kicking themselves around the block?

I’ll admit the job of an agent having to sort through thousands of manuscripts has got to be a daunting task at the very least; however, sometimes it tickles me to think of a trip around the block motivated by one’s foot. My concept of this scenario would become more evident as my series of rejections increased to a volume that would rival an elementary school’s paper drive.

Once my breakout series is discovered and I sell a few bazillion copies, I’ll think of all of those rejections and realize there’s just not enough time, nor any reason to hold a grudge.

Guess I’ll just continue writing bestsellers and maybe, just maybe, slip a few emails expressing my gratitude for their refusals. After all, that’s one of the reasons I’ll be where I am when I get there.

Could it be? I’ve Heard it Many Times…at Least I Thunked I Did, Kinda, Sorta. But Does that Mean a “Soul Mate” is For Really and For True

Writing in the Sci-Fi / Fantasy, Action / Adventure genre’s rarely do I cross paths with romance. I do however include (what I reckon to be) a proper amount of romance in my novels to smooth out the sharp corners. It tends to soften the edges of the inordinate amount of naughty characters dismembering an all-around being mean to other naughty characters.

So there, you have tapped into my goody two shoes feminine side. Maybe I should rephrase the previous concept I spent so much time rattling on about. Do you ever consider the term “soul mate?” I never gave it much thought until the past decade or so.

My house with two nine year old boys and a preteen girl was a war zone. I’d often wonder how we would survive. Well let me tell you in one word, “GOD.”

These days we’re pretty much one big happy family, with one grandson and another on the way.

My wife and I have grown closer and closer as the years have passed. The Bible says “two will become one,” and that could not ring truer. It’s not that you lose your identity you just gain an unbelievable closeness with your spouse.

She has always encouraged and supported my writing and is in every way the perfect partner for me. I guess you could call her my “soul mate.”

So there you have it, Father’s Day is in two weeks and I already have the only gift I need.

My newest release, “Terminal Core,” is being offered as an Amazon give-away for the next several days.  Check it out and maybe win a free copy!