If You Are What You Eat, Boy, Some of Us Have Some Real Problems

Little Miss Muffet sat on a tuffet eating her pork ‘n’ beans.
A spider came down and twiddled around expecting to scare her away. 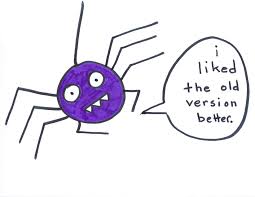 She pulled out a knife then whirled around twice raising the blade in the air.
Just 35 whacks and 3.2 hacks and everything fell into place.
With mad knife skills and culinary will a recipe started to bloom
The next day’s menu was arachnid stew and a smile of delight on her face.

If it wasn’t before it certainly is now supremely evident why I do not write poetry. I do however garner a great deal of respect for those who do. As near as I can surmise my offering would fall somewhere between Dr. Seuss and a lobotomized brick.

I will say in my own defense I have raised several interesting questions. For instance; what is a tuffet?

As near as I’ve been able to ascertain, a tuffet is a clump of something or a footstool. It seems that a “Dr. Muffet” wrote the original nursery rhyme about his daughter 500 years ago, give or take a decade or two.

I guess that’s as good an explanation why a nursery rhyme was written as any, although I wouldn’t pay more than a buck and a quarter if I were buying it.

Not having a great deal of fear for spiders, what gives me the willies about the whole poem is the curds and whey. In this day and age yogurt is the first thing that comes to mind. Even cheese is made with the milk curds after the clear liquid (or whey) is separated from the solids.

Jump back five centuries and the first picture of Little Miss Muffitt’s meal that flashes across my mind’s eye are lumps of white floating in an off-white broth. An occasional gurgle followed by a bubble or two indicate the bowl is alive with bacteria happily munching away. Light streaks of pink amidst other barely discernible pastel colors form a scum slick on top of the purulent mixture.

It reminds me of the contents in a carton of milk two or more weeks out of date. You pull the container from the refrigerator, bend back the tabs, pop out the spout and pour. At first just a small trickle followed by a large glop of udder butter.

Mm, mm. Enough of this drop at a time stuff, heat up the cow!

Isn’t it amazing the information you can glean from something as simple as a child’s nursery rhyme?

That brings another rhyme to mind. Jack and the candlestick! Boy, what fun you can have with incendiary devices.

But that’s another story…