When you set out to write a piece, it doesn’t matter if you use an outline to structure your story or fly by the seat of your pants. 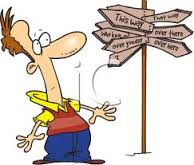 It’s a given that you must drop your cast of characters into a location, be it fact or fancy, in order to tell the story. Even the condition of the participants makes no difference as long as they’re where you put them and ready to do your bidding while being forced through the story as you weave your tale.

The location of that location can ultimately shake the credibility of your story. For argument’s sake, let’s say that chapter one takes place on a beautiful white sand beach somewhere in the Tropics. Coconut palms sway in the warm afternoon breeze. The smell of seafood cooking in banana leaves fills the air. Then, a throng of mercenaries clad in dirty underwear and headbands come frolicking from the jungle and play tag until sundown.

See what I mean? No continuity. This same linguistic problem can squeeze from between the pages of any novel and bleed over into everyday life.

Have you ever heard someone say:

We’re lost in the middle of nowhere. First, we must ask ourselves, is there really such a place as nowhere? Then, we must follow-up that question with a resounding, “no!” And to further back up this conclusion, we refer to the statement, “no matter where you go, there you are.” This phrase and this phrase alone proves without a doubt that if you are there then it is physically impossible to be nowhere.

Mayhap we should delve into this “location” quandary a bit deeper. Have you ever asked an individual the whereabouts of a particular landmark, only to receive a reply such as, “just over that hill a spell” or “down the road a piece?” Not that hard to decipher if you give it a little thought, but the real barnburner remains to be, “Over yonder.”

I was born and bred in the South, heard it all my life and just accepted it at face value. They used it in William Shakespear’s day (Hark, doth light thru yonder window break?) and even then they didn’t know what it meant. (Of course, they thought Juliet was the sun.) If someone were to ask me, “Where is over yonder and what exactly does it mean,” I would have to say, “Why, over yonder is anywhere other than here.” Its exact definition is anywhere other than here.

I want you to ponder something until we meet again. The next time you ask someone where they are going and they answer you with “nowhere,” suggest to them that since, “nowhere” is an impossibility (citing facts learned in this blog post) offer “yonder” as an alternative since you’re both already there.